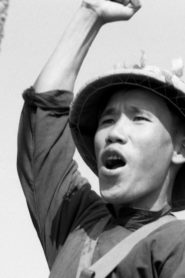 Before becoming a film critic, then a maker mainly of sharply engaged documentaries, usually in tandem with her late husband Lino Del Fra, Cécilia Mangini was a photographer. Taking pictures was something she did all her life, alongside whatever else she was working on. In 1965 Mangini and Del Fra went to war-torn Vietnam to make a film they never finished. More than half a century later, she returned to these images, moving and still, some of which she found again by accident.